Among the Rothschilds, many have travelled in pursuit of the demands of business, and the habit of sending home detailed written reports on local economies, politics and social situation began early and continues.

Salomon James de Rothschild (1835-1864), was sent to America in 1859 by his father, Baron James, arriving at a crucial time. "Either the slavery question will be buried forever, or else there will be a separation of the states and perhaps civil war", he commented cogently in January 1860, the year war broke out.

Annie de Rothschild(1844-1926) travelled to Ireland in 1860. In a letter to her mother, detailing her trip, she comments on the weather as ‘rather cloudy and grey, and the rain does not seem at all impossible’; and describes the Irish character as ‘good-natured’ and ‘humorous’.

Other members of the family, like Charles Rothschild (1877-1923) hunting for fleas, butterflies and animal specimens for his brother Lionel Walter, (1868-1937) have followed the call of a personal interest. It was on one such expedition, to the Sudan, in 1901, that he found and identified Xenopsylla cheopis, the plague-carrying flea and so solved a mystery which had baffled medical science for centuries. That expedition alone brought back 500 fleas, 600 birds and mammals and assorted butterflies and insects.

Others have travelled the world simply because it was there. At the turn of the century, Nathaniel (1836-1905) left his home in Vienna and travelled with a camera through southern Europe, the Levant and north Africa, publishing an account of his journey as 'Skizzen aus dem Sud'. In the 1930s, Henri de Rothschild (1872-1947) set out to emulate Phileas Fogg's round-the-world trip. At a rather more relaxed and self-indulgent pace, with much dining and some shopping, Henri could only manage a 150 day circuit.

Shortly afterwards, in 1938, the late Edmund de Rothschild (1916-2009), just down from Cambridge, set off on a similar, but more arduous journey, which took him into remote comers like Rangoon and Kabul and brought him into the presence of a number of statesmen and leaders, including Ghandi who sat on the floor, weakened by a recent fast, a mug of milk and honey in his hand, and discussed the plight of the European Jews.

Page from Charles Rothschild's 1902 'Round the World' photograph album showing the itinerary of his trip including Port Said Singapore Hong Kong Shanghai Vancouver and New York. 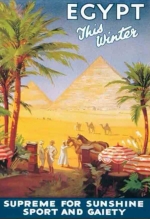 Travel poster for Egypt. Lionel de Rothschild took his family to Egypt on a 'Thomas Cook's Tour' in the 1920s.