It has been estimated that the Rothschild family has given more than 60,000 works to over 150 public institutions within the space of a century. Many former Rothschild houses have become museums such as the Villa Acton-Pignatelli in Naples, and the Villa Ile-de-France at cap Ferat.

A S von Rothschild Foundation for the Promotion of Arts and Crafts, Frankfurt

The Anselm Salomon von Rothschild Foundation for the Promotion of Arts and Crafts was one of only two of the Rothschilds' many Frankfurt foundations which had cultural objectives. It was founded by Hannah Mathilde von Rothschild (1832-1924) in memory of her father Anselm Salomon. The statutes of the Foundation decreed that one third of the recipients of support were to be of the Jewish faith. The foundation survived during the period of Aryanisation by being incorporated into the Pestalozzi Foundation.

Ferdinand de Rothschild (1839-1898) gave to the British Museum the Waddesdon Bequest, his spectacular collection of gold and silver artworks. As a demonstration of power and discernment, the collection tells the story of the rise of the Rothschilds as a new European aristocracy in the 19th century. Read more about The Waddesdon Bequest on The British Museum website here »

The Butrint Foundation was founded in 1993 by Jacob, 4th Lord Rothschild (b.1936) and Lord Sainsbury of Preston Candover, (both of whom remain active trustees), to save the remains of the ancient city of Buthrotos where, according to Virgil, Andromache the widow of Hector found refuge after Troy fell, and which was occupied from the 8th century BC by Greeks, Romans, Byzantines, Venetians, and the Turks. The ruins, which include a Greek theatre, a Byzantine baptistery and a Venetian castle, are spread over 35 acres in Albania, facing Lord Rothschild's villa on Corfu. As of 2012, the Butrint Foundation has evolved into a grant making organisation, offering funds to projects and groups on the ground in the Butrint National Park. Go to The Butrint Foundation website »

A foundation to establish a free public library in Frankfurt was established by Hannah Louisa von Rothschild (1850-1892) in 1887. Named in memory of her father, Mayer Carl von Rothschild, the library was modelled on the free public library system which Hannah Louise had seen in England, her mother's birthplace. After Hannah Louise's death in 1892, her mother, Louise, donated one million marks to ensure the perpetuity of the library.

The librarian was Dr. Carl Berghoeffer, a future biographer of Mayer Amschel Rothschild. The library's first home was on Bethmannstrasse, but in 1907 the library took over 15 Untermainkai, the former Rothschild residence in which the Frankfurt Jewish Museum was established in 1988. The library specialised in archaeology, art history, German, French and English philology, Jewish theology, trade and music, subjects with which the Rothschilds themselves were not unfamiliar. In the 1930s, the entire stock of the library - over 93,000 volumes - was absorbed by the Frankfurt City and University Library.

In 1919, Edmond de Rothschild (1845-1934) made a substantial donation to the Institut de France to facilitate the creation of a residence in London in which visiting French students could stay and absorb aspects of English culture. Edmond hoped that the donation would encourage mutual respect between both nations, building on feelings of solidarity developed during the First World War.

In France, Edmond de Rothschild (1845-1934), in between his tireless work to found Jewish colonies in Palestine, had found time to collect 40,000 prints and 6,000 drawings which he gave to the Louvre in 1936. His brother Alphonse had already bought over 2,000 works of contemporary French painting and sculpture and given them to over 150 museums, often to form the core of their collections. 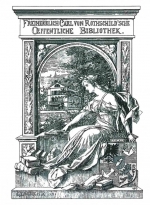