Education, and the encouragement and support of young people has been a core strand of Rothschild philanthropic activity over the past 200 years.

In 1864, Sir Moses Montefiore established a girls' school in Jerusalem, which subsequently came to be known as the Evelina de Rothschild School, in memory of the Evelina (1838-1866), daughter of Baron Lionel de Rothschild (1808-1879) who died in childbirth. The Rothschild family supported this school as well as the Rothschild Technical School for Boys which was run by the Alliance Israelite Universelle. By the early 1880s the Evelina school accommodated 184 pupils and was praised in reports of the Anglo-Jewish Association Council. An annual sum of £800 was provided by Evelina's brothers to cover all the running costs of the school, and Mrs Leopold de Rothschild (1862-1937) chaired the Committee of Ladies to supervise the curriculum. Under Miss Annie Landau, who joined the school in 1899, by the end of the 1st world war the Evelina was the 'best Jewish Girls School in Palestine', according to the Military Governor of Jerusalem.

Nathaniel, 1st Lord Rothschild (1840-1915) helped establish the Rhodes Scholarship at Oxford University, with funding bequeathed in the will of Cecil John Rhodes. This remains the oldest and most prestigious international postgraduate award. Rhodes and Nathaniel knew each other well; he had funded Cecil Rhodes in the development of the British South Africa Company and the De Beers diamond conglomerate.

In the 1820s, the sons of Nathan Mayer Rothschild began to attend universities - German ones initially, and then in the 1830s, Nathan's youngest son, Mayer Amschel (1818-1874) went to Cambridge, establishing a long connection with that university. In Frankfurt. Hannah Mathilde von Rothschild (1832-1924) supported the founding of the University of Frankfurt in 1912, with an exceptional sum of 500,000 Reichsmarks; the university (Goethe University Frankfurt) opened in 1914 as a citizens' university. In 1992, the Rothschild family helped found the Rothschild Visiting Professorship programme at the Isaac Newton Institute for Mathematical Sciences at Cambridge, and in 1998, as part of the bicentenary celebrations, the N M Rothschild & Sons Professorship of Mathematical Sciences chair was endowed at the Mathematics Faculty and a separate charitable trust was created to commemorate the life of Victor Rothschild - a Cambridge scholar with close associations to the University. The Victor Rothschild Memorial Fund was created to encourage the study of mathematics in schools and to assist especially gifted children from less privileged backgrounds. 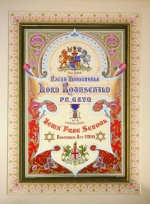