Social housing, employment and the relief of poverty was a shared family interest, and across Europe, the Rothschild family endowed, supported and created a huge number philanthropic endeavours in these areas.

Charlotte von Rothschild Fund for the Relief of Poverty in Frankfurt

Hannah Mathilde von Rothschild (1832-1924) established the Charlotte von Rothschild Fund for the Relief of Poverty in Frankfurt in 1878, in memory of her mother, the daughter of Nathan Mayer Rothschild (1777-1836). The fund was intended to support single or widowed women of any religious persuasion, who could find no free place in a rest home or sanatorium, or who needed medical equipment or supplies. The payment of support was handled by the City's Poor Board.

Lionel de Rothschild (1808-1879) combined humanitarian concerns with business.  In 1846, the British Relief Association was formed in his room at New Court, St Swithin's Lane, the premises of N M Rothschild & Sons in the City of London to assist the Irish peasantry in the wake of failures of the potato crop.  Lionel donated £1,000 to the fund and in 1847, in association with Barings, he contracted the Irish Famine Relief Loan which raised £8 million.

Founded in 1885 by Nathaniel, 1st Lord Rothschild (1840-1915), the Four Per Cent Industrial Dwellings Company was established to provide “the industrial classes with commodious and healthy Dwellings at a minimum rent” and was primarily aimed at serving the Jewish population in East London, who suffered from overcrowding and poor accommodation. The company was formed as a commercial business, with a board consisting of other notable Jewish philanthropists such as Frederick Mocatta and Samuel Montagu. In addition to generating moderate and safe financial returns (of 4%), the directors were motivated by the clear social return which providing higher quality accommodation at affordable prices could provide.

A company prospectus for the Four Per Cent Industrial Dwellings Company was issued in 1885 stating the intention to erect on a 3/4 acre freehold site in Flower and Dean Street, Thrawl Street and George Street in Whitechapel a block of model dwellings to house about 186 Jewish families. It was estimated that if the rentals were based on a return of 4%, good accommodation - two rooms, a scullery and 'other convenience'- could be provided at a weekly rent of 5s per tenement. The Chairman of the company was Nathaniel, 1st Lord Rothschild (1840-1915), and he subscribed £10,000. A further £70,000 share issue was launched in 1901, at which time it was reported that five blocks of dwellings had been opened since 1887: named Charlotte de Rothschild, Brady Street, Nathaniel, Stepney Green and Evelina housing a total of 4,465 persons in 948 tenements. The company also held the freehold of the Brady Street Club for Working Boys, 52, New Church Road, Camberwell (adjoining the Evelina Dwellings) which consisted of a shop and five rooms. The 1901 share issue was intended to develop a recently acquired site at Stoke Newington between Gordon Road and Victoria Road. Compared with other accommodation at the time, one dweller pronounced that, 'Rothschilds was luxury'.

The Invalids' Kitchen at Bishopsgate, London was founded and largely supported by Charlotte, Baroness Lionel de Rothschild (1819-1884). The kitchen operated under the auspices of the Jewish Board of Guardians, and supplied food to, among others, members of the Jewish community who were convalescing in the home founded by Louise, Lady Anthony de Rothschild (1821-1910). From its base in Artillery Lane in London's East End, the kitchens were supplying around fifty packed meals per day by the 1870s. The kitchens were managed by a lady almoner, and pupils from the Jews' Free School acted as trainee cooks.

Nathaniel, 1st Lord Rothschild (1840-1915) was a trustee of the London Mosque Fund, established on 9 November 1910. At that time, there was a growing Muslim population in Britain but no place of worship was available to them for Friday prayers. As a result, a meeting of high-profile Muslim and non-Muslims was held at the Ritz Hotel in order to discuss the procuring of a permanent place of worship for Muslims and the London Mosque Fund was created to take this forward. In the early 1940s, the fund acquired three buildings which were converted into The East London Mosque. The location has since moved but this mosque remains a central location for the British Muslim community. Nathaniel was a trustee of the London Mosque Fund (now The East London Mosque Trust) until his death in 1915.

The Louisa Cottages, a row of eight houses facing the Walter Rothschild Museum at Tring, were built in 1893 to house retired employees of the Tring Park Estate of Nathaniel, 1st Lord Rothschild (1840-1915). Designed by William Huckvale, they were funded by Emma, Lady Rothschild (1844-1935), and named after her mother. Residents benefited from the unparalleled health service provision established by Emma for the estate's workers.

The cost of the establishment of the lifeboat station at Hythe in 1876, together with a sum towards its future maintenance, was provided by Hannah de Rothschild (1851-1890) in memory of her father, Mayer, who had served as the MP for Hythe. Between 1876 and 1930, a succession of three lifeboats named 'Mayer de Rothschild' were provided. The boats were launched 39 times in that period, saving a total of 41 lives.

The orphanage at rue Lamblardie was founded in 1874 by Salomon (1835-1864) and Adèle de Rothschild (1843-1922), in the vicinity of the hospitals created by the Rothschild Foundation in 1852. Boys and girls were educated by the orphanage. The boys were then placed in apprenticeship schemes and the girls continued to help with the work of the orphanage until they reached their majority. After the Second World War, a new teaching system was applied to the orphanage, closely supervised by Germaine de Rothschild (1884-1975), who always maintained an interest in the welfare of children.

In 1889, Nathaniel, 1st Lord Rothschild (1840-1915), became a member of a parliamentary commission appointed to report on the problems arising from the vast increase of the population of London. He urged the London Jewish community to unite on what was known as the 'East End Scheme', a plan for improving spiritual and social life in the area. There was vigorous opposition to the 'East End Scheme' by other members of the community, and in spite of Natty's offer of £20,000 towards the expenses, nothing came of the plan apart from annual free services on New Year's Day and the Day of Atonement, which he regularly attended.

Baron James de Rothschild (1792-1868) established a foundation in Paris in 1852, of which the first manifestation was the construction of a hospital on the rue Picpus. Between 1852 and 1860, the hospital accommodated 8,000 patients, and patient numbers increased steadily in the following decades. The scope of activities of the Fondation Rothschild was extended by the Rothschild brothers Alphonse (1827-1905), Gustave (1829-1911) and Edmond (1845-1934) in 1904. In addition to healthcare, the Fondation objective was to improve the material condition of workers, and the Fondation built six tenement blocks on the roads named Marcadet, Bargue, Belleville, Popincourt and Lamblardie, which consisted of 1,200 apartments and 160 commercial sites. The building materials used meant that the exterior had a less forbidding appearance than many similar projects. The buildings had excellent sanitary provisions and communal services, the later ones benefiting from educational provisions, a dispensary, and an electricity supply.

Lady Constance Battersea (née de Rothschild) (1843-1931) was particularly active in a number of causes. Profoundly committed to the social concern instilled in her by her mother, Louise Constance became active in the temperance movement that flourished in England and America in the mid and late nineteenth century. She joined the British Women’s Temperance Association in the 1890s and eventually became a leader of temperance campaigns in London and the provinces.

Having acquired Ashton Wold from his father, Nathaniel, 1st Lord Rothschild, Charles Rothschild (1877-1923) rebuilt the village of Ashton. With William Huckvale, a local man, as architect, the cottages were constructed from brick and local stone and the roofs were thatched with sedge and reed. Charles provided every cottage with a bathroom; in 1901 it was thought that Ashton was the only village in England with a bath in every house. The gardens were planted with laburnum, lilac, cherry and apple trees.

Albert (1844-1911), the head of the Vienna house, acquired an estate at Langau in 1870. The region was of great ecological significance. Albert's son, Alphonse (1878-1942), employed 190 men on the estate during the 1920s, each housed in a chalet built by Albert. The building began in 1870. Set in the magnificent grass parkland of the estate, the chalets were constructed from local timber, with gabled roofs of slatted wooden tiles. Inside, the chalets boasted metal-lined wooden baths.

In memory of her father, Wilhelm Carl von Rothschild who died in 1901, Minka von Goldschmidt-Rothschild (1857-1903) created a foundation for Charitable and Benevolent Aims in his name, with a bequest of one million marks. One of the aims of the foundation was to create living accommodation for less wealthy inhabitants of Frankfurt, and in 1910, a house was opened at 142-146 Hügelstrasse. The building contained 39 one and two roomed apartments for women. School-leavers were also a concern of the Foundation, as were residents of Frankfurt finding themselves no longer able to pay their rent or to provide adequate heating for themselves. During the period of National Socialism in Germany, much of the foundation was handed over to other institutions and the women's home was sold, but a large part of it was reconstituted. In the post-war years, the foundation's aims continued to be the provision of support for fuel and rent, and the running of a home for elderly, single women.

Members of the English Rothschild family were involved in work to address a wide range of social issues. Lady Constance Battersea (née de Rothschild) (1843-1931) was particularly active in this area. After her marriage to Cyril Flower, Lord Battersea in 1877, Constance combined a lavish social life with charitable activities. Profoundly committed to the social concern instilled in her by her mother, Constance became active in English philanthropy, and became engaged in the temperance movement that flourished in England and America in the mid- and late- nineteenth century. She joined the British Women’s Temperance Association in the 1890s and eventually became a leader of temperance campaigns in London and the provinces. Constance was introduced to the women’s movement in 1881 by suffragist and temperance worker Fanny Morgan, whom Battersea helped to undertake a political career that resulted in her election as mayor of Brecon. In 1885 Lady Battersea was jolted into struggling with the sensitive issue of white slavery by a national scandal and journalistic exposés of child prostitution and white slavery - trafficking in girls and women. Moreover, journalist W. T. Stead’s articles about white slavery also fanned prejudice against Jewish immigrants by accusing East European Jews of being the source of the traffic in prostitutes and also the source of corrupting English girls and women. Horrified by the plight of many young women, Constance engaged many among the liberal leadership of Anglo-Jewry in the fight to rescue Jewish prostitutes by founding the Jewish Association for the Protection of Girls and Women (JAPGW). Founding the JAPGW launched many Anglo-Jewish women into organized English feminism and established the roots of an Anglo-Jewish woman’s movement seventeen years before the founding of the Union of Jewish Women. In the mid 1890s, her reputation for social activism led her to become active in the movement for reforms of English women’s prisons. 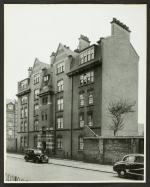 Housing of The Four Per Cent Industrial Dwellings Company Ltd in London.

Social housing of the Fondation Rothschild in Paris.