The name Rothschild comes from the house in which the family lived in the sixteenth century.

House at the Red Shield

House at the Green Shield

This property was known as the "House at the Green Shield" and Gutle was to remain here until her death in 1849. It was in this fourteen foot wide by thirty-eight foot long four-storey house illustrated here, that Mayer and Gutle's ten children grew up, their five sons to become the future bankers to European monarchs and governments. 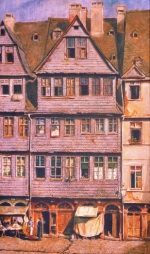