The Rothschild Coat of Arms

Patent for the first Rothschild coat of arms, 1817

The title of nobility granted to the Rothschilds by Austria permitted the use of the 'von' in the name and stems from an Order in Council of Francis I of 21 October 1816.  The design submitted by the brothers for their Arms was accompanied by a letter of explanation in Salomon's hand. The proposed design included:

The Rothschilds asked for separate patents of nobility for each of the four brothers as they lived in different countries. The separate patents were granted, but the design was considered too grand.  The response to the application had a 'suitable' design attached to it, without the coronet, heraldic animals supporting the shield, or the lion and leopard.  Also, the arm grasped just four arrows.  A letter in the Archive from Amschel to Salomon and Nathan in November 1816 reads, ".....James and Carl received the nobility.  It is a pity that Nathan did not want it."

The grant to Nathan and his heirs, and also to his brothers and their heirs, refers to Nathan's brothers as 'de' Rothschild. It was accompanied by the following armorial design:

Azure, a lion passant guardant erminois grasping five arrows the pheons downwards, or, and for the crest on a wreath of the colours, out of a crown vallery gules a demi lion erminois holding between the paws five arrows as in the arms.

The design for the arms was modified at this stage: the seven-pointed coronet was restored, the lion was granted, there were five arrows, the lion and unicorn as supporters, three helmets and a latin motto. The lion was an important concession as far as the brothers were concerned, and they felt that its inclusion in the English Arms was a triumph which helped in the negotiations with the Austrian Heralds.  The Barony was granted to the five brothers and their heirs and descendants of both sexes. The description of the Arms is as follows:

Arms: A pointed gold and blue quartered shield with a red central shield, in the middle of which is a right-facing shield; above right on a golden shield is a simple black eagle with open jaws, red outstretched tongue, wings spread, taken from the Arms; above left and below right in the two blue fields comes out of each edge of the shield a bare arm, the hands of which hold five white-feathered arrows with the points downwards; below left on a golden field is an upright natural Lion with open jaws, red outstretched tongue.

Crest: The shield is surmounted by a baronial crown, wound round with small pearls and decorated with five large pearls, topped with three crowns which are surrounded with, on the right, black and gold and on the left blue and silver covering, on top of noble "tournament-style" helmets; from the crown positioned above the visor of the helmet in the centre stands the eagle as described above, the helmets on the right and left are turned towards one another, from the crown on the right helmet floats a golden star between two alternately coloured gold and black buffalo horns, from the crown on the left helmet come three ostrich feathers, viz. two blue and one silver.

Supporters: In the foreground as supporters are, right, an upright golden lion with open jaws, red outstretched tongue, and holding the shield with the forepaws; left a silver unicorn, likewise supporting the arms with front feet.

Motto: Beneath the shield are written on a flowing red and white band the Latin words: 'Concordia, Integritas, Industria' (Harmony, Integrity, Industry). 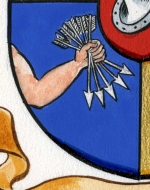 Detail of five arrows from a Rothschild family coat of arms 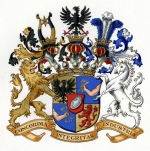