It is with deep sadness that we hear of the passing of Sir Evelyn de Rothschild, a remarkable man, renowned financier and former chairman of N M Rothschild & Sons.

Sir Evelyn was born in 1931 and joined N M Rothschild & Sons in 1957 to be trained in the family's business. He took over as Chairman almost two decades later (1976), remaining in this role until 2003 when he oversaw the merger of the French and UK businesses.

In his long service to the business, spanning almost 50 years, he made an extraordinary contribution and was instrumental in creating the business we know today. He will be greatly missed by those who knew him, including those of our colleagues who had the privilege to work with him.

In more recent years, Sir Evelyn continued to be active in business and a keen philanthropist, supporting social welfare causes, promoting the arts and encouraging research into medicine and education. He was invested as a Knight in 1989.

Sir Evelyn is survived by his children Jessica, Anthony and David and his wife, Lynn Forester de Rothschild.

Our thoughts and sincerest condolences go to his family.

The Trustees and staff of The Rothschild Archive 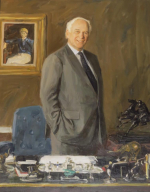