Brief history of the Frankfurt house, M A Rothschild and M A von Rothschild & Söhne

Mayer Amschel Rothschild (1744-1812) laid the foundations on which his five sons would build their Europe-wide businesses. From humble beginnings he became Court Agent to numerous princes, and holder of the monopoly on the management of the finances of the immensely wealthy Elector of Hesse-Cassel. As a result of these dealings, Mayer Amschel amassed a not inconsiderable fortune and, in 1810, renamed his firm M A Rothschild und Söhne, establishing a partnership with the four sons still in Frankfurt.

Mayer Amschel died in 1812, and his eldest son, Amschel Mayer (1773-1855), took over the management of what was now the Frankfurt House in the Rothschild banking business. The House took a lead in the business of government bonds, while Amschel’s partners, his brothers Salomon (1774-1855) and Carl (1788-1855), travelled from court to court and congress to congress, making connections and negotiating contracts. Salomon and Carl eventually set up satellite Houses, in Vienna and Naples respectively, and continued to conduct major bond transactions on behalf of the Frankfurt House.

The brothers were enobled by Austria in 1822, and by 1828 the Frankfurt bank had become M A von Rothschild & Söhne. However, the change in status could not conceal the fact that business in Frankfurt was stagnating. By 1901, and the death of the bank’s last remaining partner, Wilhelm Carl (1828-1901), Frankfurt was no longer a significant financial centre. No family members in London, Paris or Vienna wished to move to the Prussian city, and the decision was taken to liquidate the House.

For a detailed history of the Frankfurt house, and information about its archives, Go to The Guide to the collections of The Rothschild Archive » 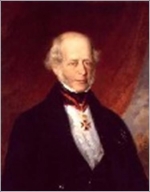