In 1817 James de Rothschild bought the late 18th-century château de Boulogne from another banker, Jean-Charles Davilliers. Situated well beyond Passy at the edge of the Bois de Boulogne with the Seine running parallel to the estate, it provided the ideal summer retreat while still allowing easy access to Paris. Not only could James and his sons travel to work, but provisions could be transported by barge along the Seine between the château and the family's town house in the rue Laffitte. In 1855 the architect Joseph-Armand Berthelin was commissioned to rebuild the house, creating a château in the style of Louis-Philippe. Eugène Lami, better known as a painter, produced the interior decor designs for Boulogne as he did for Ferrières. His work showed the influence of the palace of Versailles and Louis XIV style.

The gardens of Château de Boulogne

The Château stood in the middle of a park of one hundred hectares, ornamented with magnificent trees, French gardens, a splendid rose garden and a unique pergola covered with wisteria.

The château passed to James' youngest son, Edmond, who added his own alterations, commissioning Germain Debré to draw up the plans. After Edmond's death, his daughter, Alexandrine lived there until war broke out, after which the house fell into disuse and the garden was given to the town. 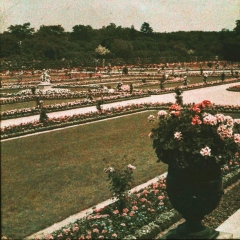