In 1914, a patriotic fervour swept the nation, and the Rothschilds were not alone in embracing the typical ‘mood’ of 1914.

Lionel Nathan de Rothschild (1882-1942) was reluctantly persuaded, by no less than the King himself, that he would serve his country best if he remained at the heart of New Court. He put himself to the tasks of managing the business and placing his considerable resources behind the war effort.

Lionel had established a recruiting office at New Court three months before a War Office Circular of 18th December 1915 formally noted the establishment of a Central Jewish Recruiting Committee with Edmund Sebag-Montefiore as Chairman and Lionel as Vice-chairman. The Committee’s purpose was to encourage the recruitment of Jews. The first meeting was held on December 15th, 1915 at Bryanston Square, home of Edward Sebag­ Montefiore, where 'Major Lionel de Rothschild explained the disabilities under which Jewish Recruiting was suffered'.

The site of operations of the Committee was New Court. Initially meeting every 3 or 4 days, and later monthly, the Committee moved quickly to fulfill its purpose. As the war continued, the Committee's remit widened to include matters of welfare of Jewish soldiers, for example providing lodging for Jewish soldiers passing through London, and Jewish Chaplaincy services in the field of battle, working closely with The Visitation Committee of the United Synagogue, and the Jewish Army Chaplain, the Reverend Adler. 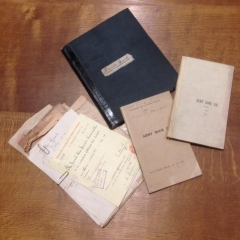