The first Rothschild garden in England

Nathan Mayer Rothschild (1777-1836), the founder of the London bank N M Rothschild & Sons, acquired the Gunnersbury estate, to the west of London, in 1835, but died before renovations were complete.

Gunnersbury Park was the first major Rothschild garden in England; the huge trees, notably the famous cedars, rose arches on the lawn, the Temple overlooking the lily ponds and astonishing variety of fruit, made it one of the most famous of its day.

It was under the subsequent generations of Nathan’s son, Lionel (1808-1879) and his grandson, Leopold (1845-1917) that the house was altered and the gardens transformed. Leopold was responsible for the development of the wide range of gardens at Gunnersbury including a heath garden, a bamboo garden and an Italian garden. The Japanese garden was inspired by the beautiful gardens at Lake Como in Italy, and was the most formal part of the landscape at Gunnersbury, including a bamboo avenue, using thirty different species and varieties, and a bamboo bridge. Complete with an elegant tea house, it caused a sensation when it was planted in 1901.

Today, the house is a museum, and the surviving park is owned by the London boroughs of Ealing and Hounslow, and the house and gardens are in the process of renovation.

Extract from the Notebook of Thomas Hobbs, Gardener to Leopold de Rothschild

An entry for November 1894 gives an indication of the daily tasks a Head Gardener would have undertaken. 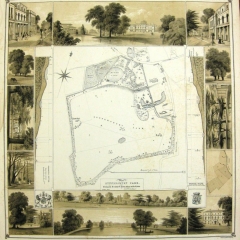 Map of the Gunnersbury estate 1847