16: Rothschilds and the plant hunters

The creation of beautiful and exotic gardens was a serious undertaking. Charles Rothschild (1877-1923) considered himself a naturalist, rather than a horticulturist, and made many collecting expeditions around the world in pursuit of seeds and plants.

In 1918 Lionel de Rothschild bought the Exbury Estate on The Solent, near Southampton, with a view to creating an ambitious garden.  To obtain the rare and specialised plants he wanted to use, Lionel contributed financial sponsorship to the expeditions of some of the most famous plant hunters of the day. He was especially interested in rhododendrons and azaleas, for which Exbury has become famous. Many of these plants came from the wildest parts of China, Tibet, Burma, Assam and the Himalayas.  Seeds and specimens were sent back to Exbury for cultivation, and the plants were then used to produce new hybrids.

Lionel supported Frank Kingdon Ward (1885-1958) on many of his expeditions during which Kingdon Ward found many notable specimens and suffered many accidents, including being impaled on a bamboo spike, falling off a cliff and having his tent crushed by a tree in a storm.

Lionel had helped fund the plant hunter Sandy Wollaston (1875-1930) on his Everest expedition in 1921, which was organised by the Royal Geographical Society.

Arthur K Bulley (1861-1942), a wealthy Liverpool cotton broker, was a regular correspondent of Lionel’s and another horticulturalist who supported the plant hunters’ expeditions. His Ness Gardens in Cheshire was planted with ‘new and rare out-of-the-way’ alpine and hardy flowers, which came from remote and wild areas of China, Burma, Tibet and India.

George Forrest (1873-1932) was another plant hunter supported by Lionel. He qualified as a pharmacist, which introduced him to botany. A small legacy gave him the opportunity to travel. On his return to Scotland he began to work at the herbarium of the Royal Botanic Garden in Edinburgh and eventually came to the attention of Bulley who was looking for someone to lead an expedition in the mountains of south-west China in 1904. All his companions were murdered by fierce local nationalists, and he alone escaped by sheer good fortune. This did not extinguish his appetite for exploring and thereafter he visited Yunnan many times until his sudden death in 1932. 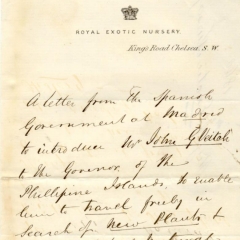