7: Testimonial from the Jews' Free School

The origins of the Jews’ Free School date back to the eighteenth century. The school was founded to provide basic education to the children of London's Jewish poor. In the nineteenth century, the school was located in Bell Lane, Spitalfields, in London's East End.

Founded as a charity on the philanthropic initiative of the more wealthy members of Anglo-Jewry, the Free School was supported and financed by benefactions and subscriptions, notably from the Rothschild family.  From 1822 until her death in 1850, Nathan's wife, Hannah (1783-1850), gave an annual benefaction of £500 to provide complete suits of clothing for the 500 boys and girls at the school. In 1837, Hannah established an accumulating fund for the permanent endowment of the school, to which the Rothschilds gave substantial donations, and from 1841 to 1906, the school’s investment account was held by the London bank.

“For a period of more than forty years, she would most regularly attend the Committee meetings and acquaint herself with all the working of that gigantic institution.  Even when she lived during so many months of the year at Aston Clinton, she, who was never physically strong, would travel up to and down from London in the dark winter days, taking her accustomed place at the Committee table, hearing the children repeat their lessons, and encouraging the army of teachers.”

In 1858, as a result of her teaching at the school, Charlotte, Baroness Lionel de Rothschild published Addresses to young Children: Originally delivered in the Girls' Free School, Bell Lane. The book ran to numerous editions including translations into French and German. 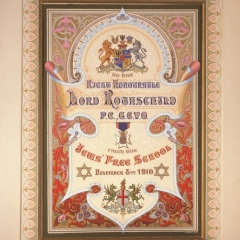