Nathan Rothschild in London, although otherwise cautious about South American investments, took an early interest in the new state. He was probably considering a loan to Brazil as early as 1823, but the first loan in 1824 was managed by a group of smaller contractors consisting of Baylett, Farquhar & Co., Alexander & Co. and Wilson, Shaw & Co. Nathan may well have discretely supported this group, because in 1825 he managed a second, larger, tranche of the loan, amounting to £2,000,000.  The loan was secured on customs revenues.

When the South American speculative bubble burst at the end of the 1820s, Brazil managed to preserve a degree of solvency. This was in large part due to Nathan's financial innovation in raising a loan of £400,000 in 1829 specifically to service Brazil's existing debts. This bond is thought to be the first of its kind.

Brazil would continue to be reliant on foreign loans and continue to have difficulties in repaying the principal of these loans, but a file note c1852 acknowledges that the bank had:

"not lost sight of the position which the Bonds of the Imperial Government hold, from the undeviating punctuality with which during 28 years the dividends of these Loans have been paid." 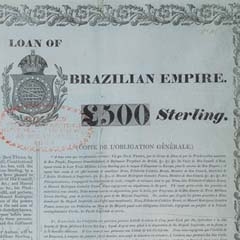