2: Business during the war

It was vital that the world of commerce and business should continue. In August 1914, the Chancellor Lloyd George sent for the Senior Partner of N M Rothschild & Sons, 'Natty' 1st Lord Rothschild (1840-1915) to discuss what measures should be adopted to keep the currency steady in the time of conflict.

Lloyd George recalled that Natty ‘had a high sense of duty to the State…and was prepared to make sacrifices for what he genuinely believed in’. The Chancellor awaited his visitor with some trepidation, as he was keenly aware that he had made more than one reference 'not of the kind to which the great House of Rothschild had hitherto been subjected'.

'Lord Rothschild,' said Lloyd George as he shook hands, 'we have had some political unpleasantness ... ' Natty brushed the attempted apology aside with his famous curtness. 'No time to bring up such things. What can I do to help?' 'I told him,' wrote Lloyd George 'He undertook to do it at once. It was done.'

Natty died in 1915, and his son Charles (1877-1923) succeeded him at the helm of the London business, guided by his uncles Alfred (1842-1918), and Leopold (1845-1917). Charles served on the committee of the Volunteer Munitions Brigade and offered his services as a financial expert to Lloyd George's Ministry of Munitions.

In France, Edouard Alphonse de Rothschild (1868-1949) managed the business with a fastidious and consciously old-fashioned approach.The Frankfurt house of M A Rothschild & Söhne had been liquidated in 1901, a voluntary decision by the family, as there was no male heir to take on the running of the business. 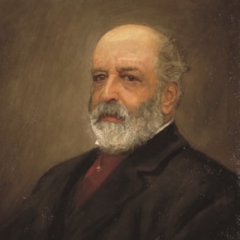