Brought up in the Jewish ghetto of Frankfurt, Nathan Mayer Rothschild and his brothers were imbued with a strong sense of the tradition of Zedaka, which places expectations on members of the community to work for social justice by offering material support for those in need. As the family's wealth and influence grew, so did their commitment to this principle, along with their ability to apply it in more ambitious ways.

The Amschel Mayer von Rothschild Foundation for the Jewish Poor in Frankfurt was set up in 1857 under the terms of the will of Amschel Mayer (1773-1855) with an initial capital of 1,200,000 gulden. The interest on the capital was disbursed weekly amongst the Jewish poor, with differing amounts being granted to groups depending on their circumstances. Provision was also made for any remaining sums of the interest to supply fuel in the winter months. By 1885 the Foundation was administered from 145-149 Judengasse, and then in the restored Rothschild family home at 147-148. In 1940, the assets of the Foundation were seized by the State.

Georgine Sara von Rothschild (1851-1869) was the daughter of Willy Carl (1828-1901), head of the Frankfurt house. She died at a young age, and the foundation named after her was established by her parents who contributed 30,000 gulden yearly to sustain it. The Institution for Sick Foreign Jews was further endowed by Willy Carl: in his will he left a sum of two million marks to enable the institution to continue its work. The hospital created by the original endowment stood on the Unterweg, and by 1878 had moved to 97 Roderbergweg, where it was described as, 'a splendid building in a.simple, noble style'. The Rothschilds' childrens' hospital also stood on Roderbergweg. In spite of Aryanisation during the Second World War, the foundation was reconstituted in 1976, pursuing its original aims. In 1931, Georgine's sister, Adelheid (1853-1935), made a donation to enable further development of the hospital, which was described as of modem appearance, providing 50 beds and a range of specialist departments.

The Jewish Board of Guardians (now Jewish Care)

There were various ancillary health services connected with the Jewish Board of Guardians.  It made use of the home for Jewish convalescents founded by Louisa, Sir Anthony's wife, while food for invalids was supplied by Baroness Charlotte's Invalids’ Kitchen.  Baroness Charlotte also enabled the Rev. A L Green to present to the Board 10 sewing-machines for the girls' workroom for dressmaking in 1861. From 1867 she further provided an annual subsidy of £100 (later £200) to the Board. In the 1960s the Board of Guardians was renamed the Jewish Welfare Board, and subsequently became Jewish Care.

The Jewish Ladies' Benevolent Loan and Visiting Society was founded in 1844 and was always based in London's East End. The Society was created to encourage the visits of Jewish ladies to poor members of their community to advocate prudence and economy and, where appropriate, to advance interest-free loans which were paid back in weekly instalments. These loans enabled many people to purchase equipment, such as sewing machines, in order to establish themselves in a trade and make their own living. The structure of the Society developed to include a relief fund and a savings bank. In 1890, 51 individuals were beneficiaries of the Society's work. It had much support from Rothschild ladies; Louise, Lady Anthony de Rothschild (1821-1910) served as president.

In 1876 Baron Wilhelm Carl (1828-1901) and his wife Hannah Mathilde (1823-1924) established a Jewish Orphanage in Frankfurt to be run on strictly Orthodox lines. Their daughter, Adelheid (1853-1935), and her husband Edmond de Rothschild (1845-1934) later made provision for a new building on the Roderbergweg. The children of the orphanage, like those attending the Philanthropin school in the city, found support from the family in 1938, when their evacuation to Haifa was arranged through the English Rothschilds.

It was Yvonne de Rothschild (1899-1977), wife of Anthony de Rothschild (1887-1961), Senior Partner of the London firm of N M Rothschild & Sons Limited, who first began to realize the implications of the European situation in the early 1930s. By the autumn of 1933, Yvonne had become president of a society 'to aid German Jewish women children'. She organized a fund-raising women's lunch at the Savoy Hotel on 10th December at which Lady Violet Bonham Carter was the main speaker. This was only the beginning, a few months later Yvonne persuaded the distributors of The House of Rothschild, a contemporary cinema picture starring George Arliss, to give the proceeds of the first night to her society. She collected all the great names of English Jewry and scored a financial triumph. A year later, she repeated the success with an Eddie Cantor first night. Through Yvonne, Anthony supported these efforts, co-ordinating activity for the Central British Fund for Jewish Relief & Rehabilitation and other efforts through the bank’s office at New Court, in the City.

In the late 1930s, Victor, 3rd Lord Rothschild (1910-1990) received thousands of letters begging for help. He took an active interest in the Central British Fund for German Jewry, and in 1938 wrote a letter to The Times, calling the attention of the British public to what was happening in Germany. Later that year he led the establishment of Lord Baldwin's Fund for German Refugees and in May 1939, put to auction at Christie's his most valuable picture - The Braddyll Family by Joshua Reynolds - and donated the proceeds to the Baldwin Fund. Other family members supported activities to alleviate the plight nof jewish refugees. James de Rothschild (1878-1957) arranged for an entire orphanage to be transported from Frankfurt and accommodated at his estate at Waddesdon.

In an attempt to preserve orthodoxy amongst the Jewish community in Frankfurt, the Jewish Religious Society (Israelitische Religionsgesellschaft) was established in September 1850, with founder members from among some of the most prominent and wealthiest families of the city. Wilhelm Carl von Rothschild (1828-1901) provided significant financial support, so much so that by 1853, the Society had already built a school and a synagogue, the cornerstones of community life. The Society administered a number of Rothschild charities and Wilhelm Carl left substantial funds so that its aims could be continued. Some of the funds were to be used to support Talmud scholars and needy widows in Palestine.

The Jewish Women's Home in Bad Nauheim, just outside Frankfurt, was one of six institutions naming Mathilde von Rothschild as its founder. She established the home, with 50 beds, in 1905 on Frankfurter Strasse, Bad Nauheim, to enable Jewish women and girls to take a cure for heart diseases and rheumatism. A small charge was made, but the majority of the costs were borne by the foundation.

The Jews' Hospital and Orphans Asylum was founded in 1807, one of the oldest charitable institutions of the Jews in England. The initial appeal for funds for a Jewish Hospital had been made by the brothers Benjamin and Abraham Goldsmid in 1795.  The first hospital was opened in Mile End Road, London. In 1876, it merged with the Jews' Hospital Asylum, founded in 1831, to form the Jews' Hospital and Orphan Asylum. The foundation stone to the Norwood site was laid by Sir Anthony de Rothschild (1810-1876) on 6 June 1861, in front of a crowd of over 2,000 people. Sir Anthony served as President, and strong support for the organisation came from Charlotte, Baroness Lionel (1819-1884) and, later, her son Leopold (1845-1917). Having served on the committee of Norwood for several years, Anthony Gustav de Rothschild (1887-1961) became President in 1918, remaining in post for 43 years. His son, Evelyn de Rothschild (b.1931) became Norwood's Chairman in 1995.

In the wake of an Edict of Toleration issued in 1782 by Emperor Joseph II, Mayer Amschel Rothschild (1744-1812) attempted to set up a Jewish school, the Philanthropin, in 1792. There was conservative opposition to this initially, but the school was finally established. Anselm von Rothschild (1803-1874), a grandson of Mayer Amschel was educated there. In November 1938, the Philanthropin became a target of the Nazi administration. Some of the boys who attended the school as day boys lived in the Flersheim Sichel-Stiftung, an orphanage run by Hugo and Lilly Steinhardt. Hugo was sent to Buchenwald after Kristallnacht and his release was dependant on another country taking him and the boys. A letter in 1939 to 'Lord Rothschild, London', found its way to James de Rothschild (1878-1957) who sent an agent to Germany to conduct negotiations. Thirty boys, plus the Steinhardts, made their way to James' estate at Waddesdon, where they took up residence in an estate house called the Cedars, from where they took their collective name, 'The Cedar Boys'.

In 1885, Mathilde von Rothschild (1832-1924) organised the provision of 37 beds in a rest home in Bad Soden, just outside Frankfurt, to enable poor members of the Jewish community to take the waters there. This so-called 'Kuranstalt' was one of six to pay tribute to Mathilde von Rothschild on her death. The house taken over by the foundation was known as the Philosophenruhe on Dachbergstrasse in Bad Soden. In 1912, almost three hundred patients were able to spend between four and six weeks taking the cure. Along with other Jewish institutions, the 'Kuranstalt' was destroyed by the Nazis in 1938.

In 1902, the British Government appointed a Royal Commission on Alien Immigration to look into the problems associated with unrestricted immigration. London had seen a dramatic rise in population following the pogroms in Russia and elsewhere. Nathaniel, 1st Lord Rothschild (1840-1915), was appointed to the Commission. Over 23,000 questions and answers were recorded by the Commission, which finally found that no case had been established for the total exclusion of alien immigrants. Lord Rothschild put forward positive and outspoken resistance to proposals against restriction in a supplement to the main report of the Commission.

The daughters of Wilhelm Carl von Rothschild (1828-1901), Adelheid (1853-1935) and Minka (1857-1903), together with their mother Mathilde (1832-1924), established an Old People's Home for Jewish Gentlewomen in memory of their father in 1903. The home, with 25 places, was situated on the Zeil, the fashionable Frankfurt street on which the family themselves owned property. To be eligible, the applicant had to have a spotless character. The building on Frankfurt's Zeil was provided out of the foundation's capital, and a sum for running costs was also included, and later enhanced by a donation from Adelheid in 1929. This enabled a further property to be acquired on Liebigstrasse. The assets of the foundation were seized in 1940. 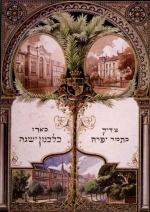 Page from a seventieth birthday address to Wilhelm Carl von Rothschild from the Israelitische Religiongesellschaft in Frankfurt in 1898.

Synagogue key presented to Lionel de Rothschild Esq on the occasion of his opening of the Brondesbury Synagogue on 9th April 1905.