The House of Rothschild first became involved with Austrian finance through the handling of English subsidy payments to her allies during and directly after the Napoleonic wars. Prince Metternich, Austrian Minister for Foreign Affairs, and Count Stadion, Austrian Minister of Finance were impressed with the reliability of the Rothschilds in remitting the subsidies without making undue profits that he recommended the family for an elevation to the Austrian nobility. The Rothschild family received the title 'von' by Imperial Austrian decree in 1817.

In 1820, Metternich entered into negotiations with the House of Rothschild for a large loan that was to take the form of a lottery. The complicated arrangements for this enormous loan demanded the presence of a Rothschild in Vienna and thus Salomon Mayer (1774-1855), who had been handling Rothschild affairs with Austria, moved to the city and established a bank there. Mercantile trade in the shipment and distribution of commodities, such as cotton, sugar and tobacco from the Americas, generated a sizeable proportion of the Rothschilds’ annual profits. In 1844 S M von Rothschild won a contract to import cigars from Havana for free delivery in Vienna. About 17 million cigars were imported, which increased Salomon’s popularity, since the Viennese had been denied access to genuine Havana cigars by import restrictions imposed by a State tobacco monopoly.

Rothschild operations in Vienna included investment in the country’s railway network; Salomon was granted the concession to construct a railway linking Bochnia and Vienna in 1832. The Kaiser-Ferdinands-Nordbahn, as it became known was finally completed in 1858. Strategically located in the middle of the Ostravian coal and iron fields in the present-day Czech Republic, the Witkowitz ironworks was in the early 19th century, the Austrian Empire's major centre for the production first of iron and later steel. Salomon von Rothschild, recognising the advantage of being able to provide his own materials for the developing European rail networks (including his own in Austria) acquired Witkowitz in 1842. The purchase was spectacularly successful. The plant was expanded, the workforce grew. Numerous dwellings and social facilities were built and Witkowitz, once a village, grew into an industrial city.  After Salomon's death in 1855, his son Anselm (1803-1874), was the able head of the Viennese House.

The descendants of Salomon von Rothschild

Witkowitz remained in Rothschild hands for nearly a century, latterly in partnership with another Viennese banking family, the Gutmanns. In 1936, preparing for the eventuality of war, the family transferred their shares to the Alliance Assurance Company in London, a move which served eventually only to delay the seizure of the plant by the Nazis. S M von Rothschild, under the direction of Louis remained in Vienna until the invasion of the Nazis in 1938. Alphonse and Eugène escaped from Vienna at the Anschluß in 1938. In 1939, S M von Rothschild was put under the temporary control of the German firm of Merck, Finck & Co., and finally sold to them, with the newly founded Vienna Bankhaus E.v Nicolai taking over in 1940. After the war, the Austrian family received some recompense but opted not to re-establish the business of S M von Rothschild. In 1948, Witkowitz was nationalised by the new Czech Government, and in 1953 the family was paid a small compensation for the works.

For a detailed history of the Vienna house, and information about its archives, Go to The Guide to the collections of The Rothschild Archive » 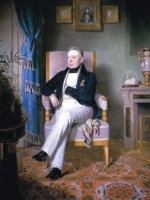