In 1922, an exhibition was held to commemorate the centenary of Brazil's independence.

The presence of Henry Lynch was certainly felt during the exhibition. Disgusted that the Treasury had refused to fund a British contribution, he persuaded Lionel de Rothschild to exert what influence he could in London. Lionel, a Member of Parliament, was successful in this, and became president of a committee in London to support the exhibition, writing to hundreds of British businesses to raise sponsorship. Lynch was involved in the practical arrangements in Rio de Janeiro.

Lynch was instrumental in persuading the battleships HMS Hood and HMS Repulse to extend their visit to Brazil to coincide with the opening of the exhibition. This proved to be invaluable when last-minute strikes and labour problems threatened disaster. The sailors were called ashore and finished the pavilion in time.

"After the President had declared the building open he proceeded right round the British Section visiting every stand in turn and taking the greatest interest in the exhibits. […] his last words before leaving were "There is no doubt who has taken the first prize".

A well in the centre of the upper floor overlooked a large scale relief map of the world set in water, over which model ships moved along the main shipping routes. On 7th September 1922, the opening day of the exhibition, when the Brazilian president visited the British pavilion the map experienced a few technical problems, described by Colonel Cole in a progress report:

"The map was also ready, and was in working order up to within about an hour of the opening ceremony when, owing to a defect in the electrical contacts, the ships were not actually moving when the President was looking at it, but while he did so some of the circuits began to start up again and the remainder were worked by hand (Hayes, the mechanic, not to be outdone, having concealed himself under the map and himself operated the wheels) and he was able to see the general idea and was much interested in it. He said jokingly it was bad of us to choose the most effective color, red, for the British Possessions and to leave Brazil with its paler golden yellow." 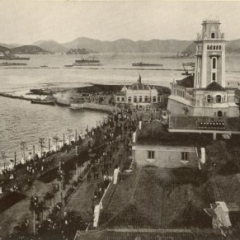