10: Testimonial to Lord & Lady Rothschild from the Jewish Association for the Protection of Women and Girls

The Jewish Association for the Protection of Women and Girls was founded in 1885 as the Jewish Ladies' Society for Preventive and Rescue Work by Constance de Rothschild (Lady Battersea) (1843-1931) and a group of influential friends and relatives. Constance was the daughter of Anthony (1810–1876) and Louise (1821–1910). Combining a happy disposition with a concern for others, Constance and her sister Annie (1844-1926) inherited their mother’s strong sense of duty to the poor; as young girls, they taught in the village schools of their home in Aston Clinton and at the Jews’ Free School.

Constance became active in the temperance movement, and the movement for reforms of English women’s prisons. She was introduced to the women’s movement in 1881 by suffragist and temperance worker Fanny Morgan. In 1885, the sensitive issues of child prostitution and white slavery were brought to public consciousness by national scandals and journalistic exposés. W.T. Stead’s articles about white slavery fanned prejudice against Jewish immigrants by accusing East European Jews of being the source of the traffic in prostitutes and also the source of corrupting English girls and women.

The Jewish Association for the Protection of Girls and Women

Constance first learned about the desperate plight of London’s Jewish prostitutes from an English missionary in 1885. With the support of Nathaniel, 1st Lord Rothschild (1840-1915), Constance engaged many among the liberal leadership of Anglo-Jewry in the fight to rescue Jewish prostitutes by founding the Jewish Association for the Protection of Girls and Women. The mixture of Jewish traffickers and Jewish victims, she believed, demanded the creation of a distinctively Jewish organization, and Constance had to overcome the resistance of many who were reluctant to even admit there was Jewish prostitution in England.

With Emma, Lady Rothschild (1844-1937) as its first President, the Association was composed of network of prominent Anglo-Jewish women closely connected to women’s temperance, suffrage and educational campaigns. The Association opened homes to rescue girls from dangerous situations, provide moral education and train them for honest employment, establishing Charcroft House (later Rosaline House and Sara Pyke House), a lodging house for 'foreign Jewesses', and supervising a ‘Domestic Training Home’ at Highbury Home and Montefiore House, an industrial school for Jewish girls. In 1889, the Association founded a 'gentleman's committee', chaired by Claude Montefiore, to assist girls and women arriving alone at British ports. Constance continued to lead the organisation and to represent the Association at international meetings until the early 1920s. 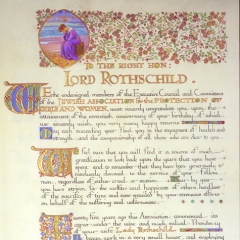