Lionel de Rothschild (1808-1879) was elected to serve as MP for the City of London in 1847. He would not be able to take his seat for another eleven years until the discriminatory legislation against Jews was removed.

Once Lionel had been elected, Russell introduced a Jewish Disabilities Bill, which would have overcome this problem. The Bill was passed in the Commons in February 1848. However, the Lords threw it out in both 1848 and 1849. Lionel was re-elected in 1849 winning by a two to one majority. On 25 July 1850 there was a meeting of electors at the London Tavern which resolved that Lionel should take up his seat in the House. Lionel duly turned up the next day. The Clerk rose to tender the oath. Lionel demanded to swear on the Old Testament. There were howls of protest from the Tory benches. Lionel was called upon to withdraw, which he did. He reappeared on 29 July 1850 and got right through the oath until the final clause where he had to swear “upon the true faith of a Christian” at which point he had to withdraw. “I omit these words as not binding on my conscience”. In 1851, another Bill was thrown out by the Lords, and in 1852, Lionel was re-elected for London. In each year from 1853 to 1857, the Disabilities Bill was put to the Lords and defeated. In 1857 Lionel was re-elected, this time coming second in the Poll. This time, when the Bill was again defeated, he resigned from his seat but was returned at the subsequent by-election.

Disraeli had now become the Prime Minister and was keen not to have Conservative Peers block the Disabilities Bill in the Lords. He therefore arrived at a compromise whereby each House was allowed to decide for itself the formula which it used to administer the oath. The House of Lords therefore became an irrelevance to the issue and Lionel’s re-entry to the Commons followed without further protest. He finally took his seat in 1858 and remained in the House until 1874.

This volume, is entitled 'City Electors list' 1847 and is a record of votes cast in the 1847 election. The volume records the names of the nine candidates who stood at the election, and the name and address of each individual who placed a vote. This volume appears to have been made privately and was retained for many years in the Partners’ Room at New Court. For more information the 'Poll Book' see the article New light on the 1847 election in the City of London by Vic Gray in The Rothschild Archive Review of the Year 2010-2011. 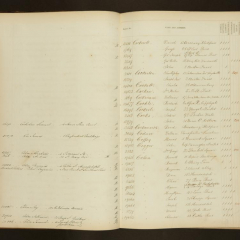