The Rothschild Archive is pleased to announce the publication of a new book about a prominent member of the English Rothschild banking family.

A new biography of Anthony de Rothschild (1887-1961), senior partner of N M Rothschild & Sons during the middle of the twentieth century, was launched in London in early December. The Rothschild Archive was commissioned to oversee the project with the generous support of Rothschild & Co.

David Kynaston, author of numerous books on the history of the City of London, amongst others, has produced a biographical portrait of a "complex, cultured and public-spirited banker" whose conviction that better times were ahead ensured the business succession. "I see no reason for not being an optimist", Anthony wrote in 1945.

Who was Anthony de Rothschild?

Anthony de Rothschild was a member of the fourth generation of the family to work at New Court. He was a highly-educated young man, passionate about sport – especially horse-racing, cricket and golf – and well-travelled. His life, like that of so many of his generation, was changed beyond recognition by the First World War – he served with distinction in Gallipoli.

The loss of his older brother in battle in 1917 and the deaths of the previous generation of partners made life at New Court all the more challenging for him when he returned from war in 1918. The challenges only continued, with the financial crises of the 1920s and 1930s soon followed by a second world war. In 1933, Anthony and his wife Yvonne (1899-1977) were among prominent Jewish founders of the Central British Fund for German Jewry, the principal British refugee relief agency providing emergency relief to persecuted persons following the Nazi rise to power. Anthony supported these efforts, co-ordinating activity through N M Rothschild & Sons’ offices at New Court. After the war he continued to direct the affairs of N M Rothschild & Sons until illness forced his early retirement in the late 1950s. Read more about Anthony’s life here »

More about the author

David Kynaston wrote of his subject:

"In politics he was open-minded and constructive whilst in his philanthropy, not least through his leading role in helping Jewish refugees (especially children) to leave Nazi Germany for England, he was thoughtful and generous. Austere on the surface but warm beneath, impatient equally of fools and ideologues, always searching for how he could contribute to make a better world – Anthony de Rothschild deserves, arguably more than almost anyone else in the twentieth-century City, to be known properly by later generations."

Access to a great collection of documents and photographs

Thanks to Anthony’s own passion for history and archives, a passion inherited by his son the late Sir Evelyn de Rothschild, a significant collection of documents and photographs survive relating to the history of the Rothschild family, forming an important component of The Rothschild Archive. David Kynaston has had access to papers that have never been seen before. Sir Evelyn, who died on 7 November this year, was enormously encouraging of the project. He gave his approval to the book after reading a proof copy in the autumn.

The book was formally launched at Hatchards in Piccadilly on 8 December. 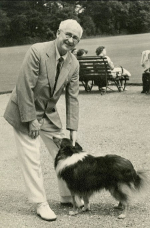