Three of the sons of Leopold de Rothschild (1845-1917) were officers in the Bucks Yeomanry. Lionel Nathan de Rothschild (1882-1942), the eldest, reluctantly remained at New Court where he was of great value to his country managing the business and organising the recruitment and provison of assistance to the troops.

Leopold's youngest son, Anthony Gustav (1887-1961) served with distinction, was wounded at Gallipoli and ended the war as a major with the General Staff. His second son, Evelyn Achille (1886-1917) paid the ultimate sacrifice. He saw early action on the Western Front and was invalided back home. Within months, he was back in the trenches, and was mentioned in despatches. Tragically, in November 1917 Evelyn died from wounds sustained in a cavalry charge at El Mughar. His mother Marie (1862-1937), was devastated.

On the continent, in France, James de Rothschild (1878-1957), one of Baron Edmond's sons managed to enlist successively in three armies: the French, the Canadian and finally the British. In Paris, the doctor of medicine, Baron Henri de Rothschild (1872-1947) designed and built ambulances and took them to the front. In Austria, Baron Albert's son, Eugene (1878-1976), had a leg shattered on the Russian front. 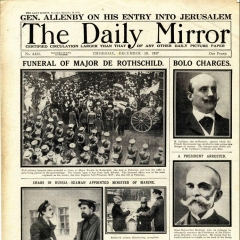 News of the funeral of Evelyn Achille de Rothschild