Brought up in the Jewish ghetto of Frankfurt, Nathan Mayer Rothschild (1777-1836) and his brothers were imbued with a strong sense of the tradition of Zedaka, which places expectations on members of the community to work for social justice by offering material support for those in need. As the family's wealth and influence grew, so did their commitment to this principle, along with their ability to apply it in more ambitious ways.

In England, Nathan supported the Jewish community, making donations to the synagogues in London, and initiating a series of discussions which led eventually to the formation of the United Synagogue, thus streamlining the charitable work of the smaller constituent synagogues.

Nathan's children recognised their obligations just as keenly. His eldest son, Lionel (1808-1879), became the first Jewish Member of Parliament after an 11-year battle, paving the way for the removal of the final civil disabilities affecting the Jewish community.

As the family began to buy country estates, the areas around their mansions were transformed by planned improvements to housing for artisans, the implementation of social facilities such as schools and health care provision, and an assurance that estate workers could rely on regular employment. 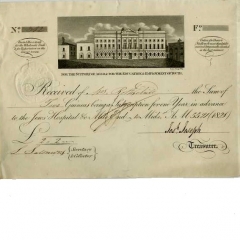