A tradition of philanthropy

Brought up in the Judengasse in Frankfurt, Nathan Mayer Rothschild (1777-1836) and his brothers were imbued with a strong sense of the tradition of Zedaka, which places expectations on members of the community to work for social justice. As the family's wealth and influence grew, so did their commitment to this principle. On the occasion of his 70th birthday on 8 November 1910, Nathaniel, 1st Lord Rothschild (1840-1915) received many testimonials and votes of thanks from the committees, trustees and boards of organisations that enjoyed support. Many of these documents are miniature works of art; a gallery of the entire collection may be found here »

The Jews' Free School dates back to the year it was re-established at Bell Lane, Spitalfields, London, 1817, to provide basic education to the poor Jewish community in London's East End. 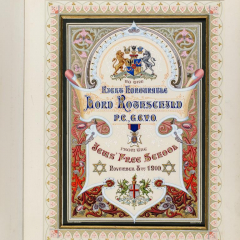