3: Letter in Judendeutsch from Nathan Mayer Rothschild to his brothers, 1816

The five sons of Mayer Amschel Rothschild (1744-1812), wrote daily to one another, their letters detailing the day’s business, market opportunities and prices, and family gossip. The use of Judendeutsch (words written in the German language and committed to paper in Hebrew characters) for their letters provided a useful means of protecting their missives from prying eyes, for although not in itself a code, the comparative rarity of understanding of the script meant that they could not easily be deciphered.

The Rothschild Archive contains over 20,000 letters written between the Rothschild brothers between 1811 and 1868. This letter of 1816 is from Nathan to his brothers.

Now dear Amschel, I am writing you my opinion as it is my cursed duty to write to you, since you are the eldest and our rabbi Amschel. Well now, I read through your letters not once, but perhaps 100 times and you can well imagine that I have nothing to do after dinner and I do not read books or play cards and I don't go to the theatre, but my only pleasure is my business and so I read Amschel's letter and Kalman's, James's, Salomon's, in short you have no idea.

No. 1. Amschel asks me whether he might buy a house. I have asked HERRIES. He has given me ½ an answer. He said to me he cannot [advise] me to live in grand style, for then the press might start writing against me and the Opposition might ask questions immediately and he said the same thing, namely that my brothers are my [….].

Well now, dear Amschel, you say in your letters that one day is not like the next and you are unfortunately not a steadfast man. A man has to undertake something once in a while and stick to it. Now, Amschel dear, please take my advice and you will see that I am certainly giving you good advice. So now, brother dear, take my advice and that of our friend HERRIES and don't buy a house, but keep away from that until my accounts here are entirely in the clear. Now, as far as a garden is concerned, you may buy that because it is for one's health only and is necessary both for your own health and that of our dear Mother's, but I advise against buying a house as well. Well now, regarding what our Kalman writes that we must decide on a house, dear and good Amschel, with respect, this is foolish because if we do good business and are rich everyone will [?flatter] you and anyone with no interest or employment with us will begrudge us the hairs on our head. […..] once there is peace and then, brother dear, the large business operations become small and in this, brother dear, I ask you as the eldest brother, please don't be too grand […..]. Now, our Salomon is too good. Wherever he is placed, he stays and if a sponger speaks a word in his ear, he thinks that all men are artful and only look to their own interests. Salomon DAVID has gone to Paris to put our account in order. Frankly he is a decent man, so help me God, a very decent man, but he has made a mistake. Before he left he purchased approximately 100 Omnium [stocks], believing he would earn £10,000. Don't identify with this, but he has lost £5,000 on it. Now he has realised that all wild transactions are worthless. He has gone to Paris because I can then […..] him …. [remainder of letter is missing.] 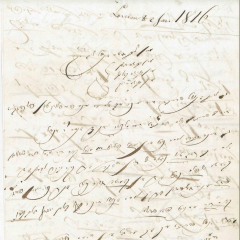