4: Badge of office of the Alliance British and Foreign Life and Fire Assurance Company, 1824

The  Alliance British and Foreign Life and Fire Assurance Company, created by Nathan Mayer Rothschild (1777-1836) and a consortium of other Jewish financiers was based at New Court for its first two years. This silver gilt oval badge, numbered ‘1’, was Nathan’s own.

Origins of the company

The Alliance Assurance Company, (today part of the RSA Group of insurance companies) can trace its origins back to St Swithin's Lane in the early 1820s. The story goes that the financier Moses Montefiore and Nathan Rothschild, neighbours in St Swithin’s Lane in the heart of the City of London fell into conversation one day as the latter was going to collect the dividends on shares he held in an insurance company. The two men agreed that with their many friends and contacts they themselves could supply a useful number of clients for any insurance company, and saw the advantages of setting up a new company themselves. There were additional attractions for such a venture. Nathan was often forced to pay high premiums to insure his international shipments of bullion and other goods, and would have been particularly keen to break the monopoly held by Lloyd’s on marine insurance.

The plan was quickly put into action. Joining Rothschild and Montefiore as founding presidents were the prominent Quaker, Samuel Gurney, and the financiers John Irving and Francis Baring. 50,000 shares of £100 pounds each were issued and rapidly sold, with only the first £10 of each share actually called up: £5,000,000 was a share capital far in excess of any of its rivals.

In a true alliance between share holders and policy holders, a condition of share purchase was that the holder would take out either fire insurance to the value of their subscription, or £1,000 in the life department. The Alliance Assurance Company opened for business on 23 March 1824 in temporary offices in Moses Montefiore’s home in New Court, St Swithin’s Lane.

Rothschilds and 'The Alliance'

The Rothschild family were not only presidents, directors and shareholders in the Alliance over the generations: they were also policy holders. Nathan Mayer Rothschild was the first President, from 1824-1836. Ferdinand de Rothschild (1839-1898), the noted art collector who built Waddesdon Manor in the 1870s, insured his property with the Alliance. So did Lionel de Rothschild (1808-1879), Nathan’s son: New Court was also insured with the Alliance. It was said that Nathaniel, 1st Lord Rothschild (1840-1915), Chairman of the Alliance and universally noted for his caution as a businessman and banker, was instrumental in persuading the company to refuse to insure the Titanic, claiming it was ‘too big to float’. 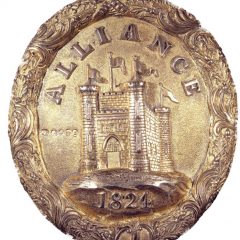