7: Commemorative album for the marriage of Leopold de Rothschild to Marie Perugia, 1881

The wedding of Leopold de Rothschild (1845-1917) and Marie Perugia (1862-1937) in 1881 caused a great stir in the international press, not the least because of the presence of the Prince of Wales at his first Jewish ceremony. The groom was one of London's most eligible bachelors and the bride a beautiful 18-year-old from Trieste, whose sister, Louise, was already well known in London as the wife of Arthur Sassoon, confidant of the Prince of Wales.

This album was one of several privately printed by the family, containing contemporary press reports of the wedding and descriptions of the wedding presents. Among the detailed newspaper reports itemising the gifts presented by the guests are two small entries that are of particular interest to the staff at The Rothschild Archive, for they reveal the existence, recorded nowhere else, of "lady clerks" from New Court, the London bank. This volume includes pieces of the broken glass from the marriage ceremony inset into a roundel on the cover; traditionally, after the bride has been given the ring, or at the end of the ceremony, the groom breaks a glass, crushing it with his right foot, and the guests shout congratulations.

Further material relating to their engagement and wedding (including the marriage 'ketubah' and the pen used by the Prince of Wales at the ceremony) will be found in the collections of the Archive, together with a small collection of items gathered together by one of the clerks at the time, Mr Burge, whose son also worked at New Court. The wedding ephemera includes a silk purse, an invitation to view the gifts (at the home of Alfred, the groom's brother, at 1 Seamore Place), a menu card for dinner and a programme of music. 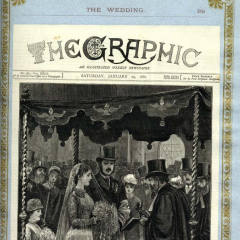