This November, we are pleased to launch the first in our new regular series of articles, 'Archivist's Choice' where a member of the Archive team chooses a document, artefact, or event and explores its significance and story.

The Rothschild Archive was established in 1978 by Victor, 3rd Lord Rothschild (1910-1990).  Having spent much of his life surrounded by academia, he recognised the potential of the Archive as an important resource to researchers.  In 1999 the ownership of the Archive was transferred to The Rothschild Archive Trust, an independent body of family members and advisers committed to securing the future of the collection and to developing its use by the academic community.  Today, one of the ways the Trust achieves this goal is by supporting museum exhibitions relating to the Rothschild family and their many interests.  Museums and archives, while having much in common, have many things which distinguish them from each other.  Over the last few years, The Rothschild Archive has had the pleasure of working with several outstanding museums. Read more here about our recent loans to exhibitions at The Jewish Museum Frankfurt and The Jewish Museum Vienna and the V&A.

It is always of great interest to see how items from ‘our’ collections items are used by curators to tell a  particular story.  Most recently the Archive has supported La Boverie museum in Liège, Belgium with the exhibition ‘The Rothschild collectors: Female patrons and donors par excellence.’ Designed in partnership with The Louvre, it introduces visitors to the world of the Rothschild family, in particular, the collections of certain women from the French side of the family. Since the 19th century, the Rothschild name has become synonymous with success in the world of finance, but also with intellectual and artistic wealth. This exhibition, which offers a fresh perspective, highlights the women of the family with their unique personalities.

Through a selection of over 350 works from around forty French institutions and private collections, visitors to the exhibition will encounter great artists, such as Fragonard, Chardin, Delacroix, Cézanne, Claudel, Rodin and Egon Schiele, but also Italian Renaissance paintings, collections of jewels and porcelain and even works of art from Africa and the Far East, a huge number of artworks that testify to the history of tastes and collecting throughout the 19th and 20th centuries.

The exhibition focuses on nine members of the Rothschild family:

Open to the public until 26 February 2023, the exhibition includes 19 images from the photograph collections of The Rothschild Archive Collection, featuring exterior views of Rothschild properties, portraits of family members, and interior views of family collections in situ.  The Curators hope the images will help guide visitors through the exhibition, putting the objects into context.

More information about the exhibition is available here. 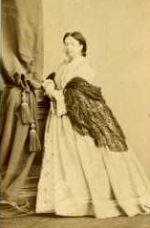 Charlotte Baroness Nathaniel de Rothschild (1825-1899) was a prolific and accomplished artist and discerning collector of art.

Charlotte Baroness Nathaniel de Rothschild (1825-1899) restored the Abbaye des Vaux-de-Cernay where she housed her collections of medieval and Renaissance objects.