The fourth Rothschild brother, Carl (1788-1855), established the fifth Rothschild House in Naples in 1821 when he travelled to the city to negotiate a loan to the Government of Ferdinand II.

Business of the Naples house

The Naples business followed the pattern of the other firms, in the field of acceptance and exchange, complemented by successful trade in commodities, such as sulphur, tobacco, silver, oil and corn. The Rothschilds' successful management of Neapolitan securities caused other Italian states to seek their services in raising credit, notably the Papal administration in Rome, on whose behalf five loans were issued between 1831 and 1850. Further loans were issued to Tuscany and to Piedmont, of which the fourth in 1859 financed Cavour's victorious Austrian campaign, heralding the formation of a united Italy. The business was also involved in railways in Sicily.

Carl took up residence in Italy with his wife Adelheid and their five children.  For the rest of his life he divided his time between his native Frankfurt and Naples, which always remained a ‘daughter-office’ of the Frankfurt bank. The business establishment was in Santa Maria di Portico, and in 1841, Carl bought a neo-classical villa overlooking the river Chiaia. Here he and Adelheid entertained distinguished guests, including Queen Victoria’s favourite uncle, Leopold of Saxe-Coburg who was to become King of Belgium.

The last Rothschild House established in Europe was the first one to close. Carl died in 1855, leaving the business in the hands of his son Adolphe (1823-1900), whose two surviving brothers assumed responsibility of the Frankfurt office on the death of their childless uncle in the same year. The unification of the kingdoms of Italy in 1860 saw the diminution of influence of Naples, and the maintenance of a Rothschild House in the city was no longer viable. Adolphe, rather than entering into business with the new regime, chose to leave Naples and opted to end his involvement in the Rothschild banking partnership. He was bought out of the partnership by his cousins, and the Naples business terminated. C M de Rothschild & Figli ceased to trade in 1863.

For a detailed history of the Naples house, and information about its archives, Go to The Guide to the collections of The Rothschild Archive » 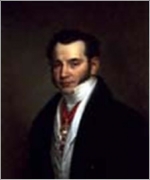 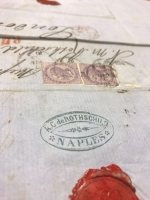 Envelope addressed to A C de Rothschild at the Naples house