Nathan Mayer Rothschild (1777-1836), arrived in Manchester in May 1799, after spending several months in London gaining experience of English trading methods. From this base he began to make his mark in the city, establishing his firm N M Rothschild to consolidate and extend the family’s trade in English printed textiles. While the Napoleonic wars raged in Europe, Nathan was anxious to secure residency rights in England, and applied for Letters Patent of Denization in 1804.

Jews born in England, while not receiving the same privileges of citizenship as Englishmen, were protected under English law, and were no worse off than Catholics or Dissenters. Foreign born Jews, however, in certain conditions, could, after 1740, place themselves without the taking of the Sacrament in the same category by becoming denizens, the then equivalent of naturalization. This was an expensive affair, and for this purpose several persons usually clubbed together.

In his signed application (now in The National Archives) dated 16 May 1804, Nathan states that he “has resided for three years last Past in that Part of the Kingdom of Great Britain called England and being an alien born is desirous to settle in the said Kingdom ... to which he has removed his effects”. Nathan's cautious statement of the length of time he had been in the country probably reflects the period of transition during which he was still travelling to and from Frankfurt. Further evidence of Nathan’s application can be found in the 'Aliens entry book', also in The National Archives.

Nathan's denization was granted by the Crown, on payment of a fee, in the form of Royal Letters Patent. The Letters Patent of Denization were granted on 20 June 1804. The document records his name at the end of a list of seven individuals: Gottlieb Wolf, from Wurtemburg, Simon Levin, from Konisburg, Roderick Willink, from Altona, Natan Ben Rindskopf [a cousin of Nathan’s], from Frankfurt, Charles Frederick Straubert [all from London], Solomon Oppenheimer, from Prussia, and Nathan Mayer Rothschild, from Frankfurt, [both from Manchester]. 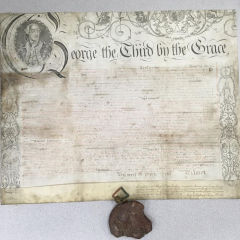