The late Dame Miriam Rothschild (1908-2005) claimed that 'before 1940, I do not believe that any Rothschild dug, planted, weeded, pruned, took cuttings, spread straw on the strawberries, or even watered their plants.' These tasks were undertaken by the vast armies of head gardeners, gardeners, under-gardeners, labouring boys and other 'outdoor' staff.

The Rothschilds exercised the same care and attention to detail in their gardens as they did their business interests and their great art collections. They planned and directed all the arrangements, from the lawns to the Japanese gardens and lily ponds, selected the plants and trees, acquired a wide knowledge and understanding of them, and took great care to procure the right soils and mixtures for their various projects.

To create the perfect garden, one had to employ the best experts. At Aston Clinton, the Buckinghamshire estate of Sir Anthony de Rothschild (1810-1876), Mr William Hedley Warren served as Head Gardener for over 30 years. At the Halton estate of Alfred de Rothschild (1842-1918) the garden staff alone numbered over 60 in 1900. Gardens on the continent were similarly impressive; at Grasse, Alice de Rothschild (1847-1922) employed over 100 men to create her famed terraced gardens on the slopes above the town. Head gardeners were well respected and salaries at the turn of the century of £100 per annum were not uncommon; young under-gardeners earned 16 shillings a week. 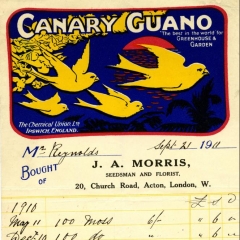