Salomon von Rothschild (1774-1855) became an Honorary Citizen of the City of Vienna in 1843, after nearly a quarter of a century’s residence. Attracted by the countryside near his new business acquisition, the ironworks at Witkowitz, he bought Schillersdorf, an eighteenth-century property overlooking the river Oder.

The estate consisted of a magnificent château, moats and fountains, kennels and game reserves as well as a foundry and other industrial works. Salomon appointed the architect Gabriel-Hippolyte Destailleur to renovate the property. Over 350 acres were carved out of the estate (which had included 11,000 acres of woodland) to make the park. Over 100 men were hired to excavate the large lake which it was hoped would attract wild duck. Plants were regularly shipped to the Schillersdorf estate from Rothschild cousins in England.

Upon Salomon’s death in 1855, the estate was inherited by his eldest son, Anselm 1803-1874), who set about transforming the property into a model farm, equipping it with modern machinery, most notably a steam pump which brought water from the river and a sophisticated system of underground pipes to irrigate the park.

Anthony de Rothschild (1810-1876) visited his cousin Anselm’s estate at Schillersdorf and wrote favourably of what he saw: ‘Schillersdorf is a very fine estate… The Park [has] been laid out exactly like Regent’s Park. There are magnificent woods of fir trees of thousands of acres all outside, so that the shooting is excellent and the drives and rides charming.’

Letter from Anthony to his brothers, September 1869 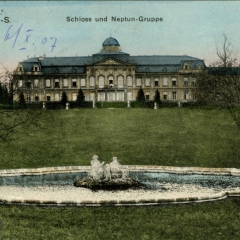 Schillersdorf from the lawns c.1905