The passion for gardens took hold on the Rothschild family, proving a more enduring interest than banking for many. One of the finest gardens created by the family was in England, at Exbury, on the Hampshire coast.

Lionel de Rothschild bought the Exbury estate in 1919 with the proceeds from the sale of his uncle Alfred’s house at Halton which he had inherited. It was Lionel’s gardening passion which led him to choose the Exbury estate. The climate was gentle and the soil was acid, ideal for the flowers which were to become his passion – rhododendrons.

The creation of Exbury's gardens

It was Lionel’s gardening passion which led him to choose the Exbury estate with its 2600 acres. The estate included some 250 acres of overgrown woodland. Labour was recruited in huge force to create the gardens: a team of 150 men and 60 trained gardeners were employed to clear the land, lay paths and manage the planting, and 22 miles of irrigation pipes were laid. Two acres of greenhouses were put up and a million plants were introduced. Lionel worked tirelessly to bring shapes and colours together to please the eye.  The village was expanded to house the massive workforce, and a water tower containing electric generators was installed to supply the village houses with water, and bring electricity to the manor house and greenhouses.  Here Lionel grew orchids and developed hundreds of new hybrid rhododendons and azaleas for which the estate has become famous. Lionel also remodelled Exbury House with neo-Georgian designs by William Jenkins, and he created an idyllic family home bounded by the New Forest, The Solent and the Beaulieu river for his wife, Marie-Louise Beer and his young family, Rosemary, Edmund, Naomi, and Leopold.

Exbury during the Second World War

Exbury House was called to play its part in the War effort. Renamed ‘HMS Mastodon’ (a stone frigate) under Royal Navy control, it became one of the key centres for the planning of the D-Day landings. Lionel de Rothschild died in 1942, aged just 60.

The restoration of Exbury

At the end of the War, it was left to Lionel’s son, Edmund, to roll back the years of  inevitable dereliction in the gardens. He did so with vigour and after his return from active service in 1946, he set about the restoration of Exbury Gardens. Over the next 50 years he replanted some three-quarters of the acreage, and produced several dozen new rhododendron hybrids. In 1955 he opened Exbury Gardens to the public.

The Gardens continue to be looked after and developed with loving care by the current generation of Exbury Rothschilds, and Exbury remains today not only a significant name in horticultural history but a living and colourful tribute to a passion. Today the Gardens and Steam Railway are a spectacular 200 acre (80 hectare) site, world-famous for the Rothschild Collection of rhododendrons, azaleas, camellias, rare trees and shrubs.

In 2019 Exbury celebrates its centenary year with special events, exhibitions and new gardens. 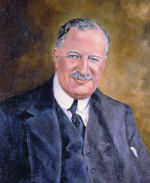