Lionel de Rothschild (1882-1942) had a passion for photography, and loved to experiment; it was inevitable that he would try his hand with the autochrome, and so he did, and with considerable success. The 700 glass plates in his collection in The Rothschild Archive represent the largest single collection of autochrome plates by an individual British photographer to have survived. 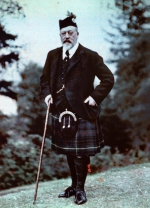